From Disinvestment to Reinvestment

From Disinvestment to Reinvestment

Activist campaigns to force corporations and governments to shift resources away from unjust and destructive systems can make a difference, Donna Katzin contends in the essay “From Disinvestment to Reinvestment.” The essay was published on May 30 by the US-Africa Bridge Building Project, a Washington DC-based nonprofit geared toward fostering transnational solidarity primarily around economic justice. Katzin’s essay cites evidence from the transnational anti-apartheid movement in the mid-20th century to later social justice movements, including the movement to shift from fossil fuels to renewable energy and the Black Lives Matter demands to shift resources from policing and incarceration to investment in underserved communities.

In her essay, Katzin notes that racism, poverty, climate change, and pandemics know no borders. This makes it increasingly clear that the rallying cry “An injury to one is an injury to all” applies to a host of global as well as national issues.

Katzin recently retired as the founding executive director of Shared Interest, which she led for 26 years. She previously directed the South Africa and International Justice Programs of the Interfaith Center on Corporate Responsibility from 1986 to 1994. Since 1994, Shared Interest has benefited 2.3 million people by issuing $30 million in guarantees unlocking more than $125 million in credit to South and Southern African borrowers who would otherwise be considered “unbankable.”

The strength of her argument was strikingly confirmed just before its publication in what news stories and leading climate justice activist Bill McKibben called “A Bad, Bad Day for Big Oil.” At the ExxonMobil board meeting on May 26, a dissident slate of candidates for the board calling for action on the climate crisis won three out of four contested seats against the company’s opposition.

On the same day, Chevron shareholders approved a resolution for tighter limits on greenhouse gas emissions. And a court in the Netherlands ruled that Shell Oil must drastically cut its emissions over the next ten years.

When asked about this news, Katzin noted that such massive shifts require mobilization over years and decades, and that it is too soon to tell the impact of this development. But, she said, “The May 26 victories may be a turning point in the campaign to press Big Oil to put the brakes on fossil fuels – before climate change becomes irreversible. It mirrors the moment when captains of industry recognized apartheid as a motor for crimes against humanity, and underscores the lesson that reinvestment in solutions is not only essential to our shared future – it is also possible.”

Similarly today’s activists can confront current challenges like those arising from the COVID-19 pandemic through a combination of boycott, divestment, sanctions, and reinvestment strategies.

“A global reinvestment coalition could coordinate campaigns to pressure companies that use public funds for the development, manufacturing, and production of vaccines, but fail to make their vaccines accessible where they are needed most,” Katzin suggests. “They could further require them to “reinvest” by pricing vaccines affordably and delivering them equitably to low-income countries and communities.”

Among the tactics deployed by transnational solidarity activists to end apartheid, according to Katzin, campaigns to pressure multinational corporations to withdraw their investments and sever economic ties to South Africa proved especially effective. “These campaigns for disinvestment of resources, mobilizing massive support across the globe, set precedents and provide touchstones for today’s solidarity movements,” she writes.

Economic pressure through boycotts, divestments and sanctions have been and remain powerful tools to change corporate and national policies that harm and hinder social and economic mobility. However, for these efforts to have a lasting impact, they must be paired with strategies that reinvest resources in disadvantaged communities and countries.

The same message comes through clearly from the Movement for Black Lives and their allies. The message is clear. Organizing to defund entities exploiting, threatening, and imprisoning Black, indigenous, and communities of color. But reducing these destructive uses of resources must be accompanied by positive reinvestment in communities, including housing, education, health, and criminal justice.

The fight against injustice can only succeed if it is linked with a vision of justice. The reallocation of resources is both a means to realize that vision and a measure of its success.

Katzin’s essay is the second original essay in a series of essays for a Playbook for Transnational Solidarity. The Project also published a companion essay on May 30, reposted with permission from the Sierra Club magazine, entitled “Redefining the Possible,” by Varshini Prakash of the Sunrise Movement. Together, the collection of essays draws on the collective experience among transnational social justice movements to seek lessons relevant for today. The first essay, “Confronting Global Apartheid Demands Global Solidarity,” published on April 19, was accompanied by a video featuring Angela Davis’s speech in 2016 at the Steve Biko Memorial Lecture in Pretoria, South Africa. 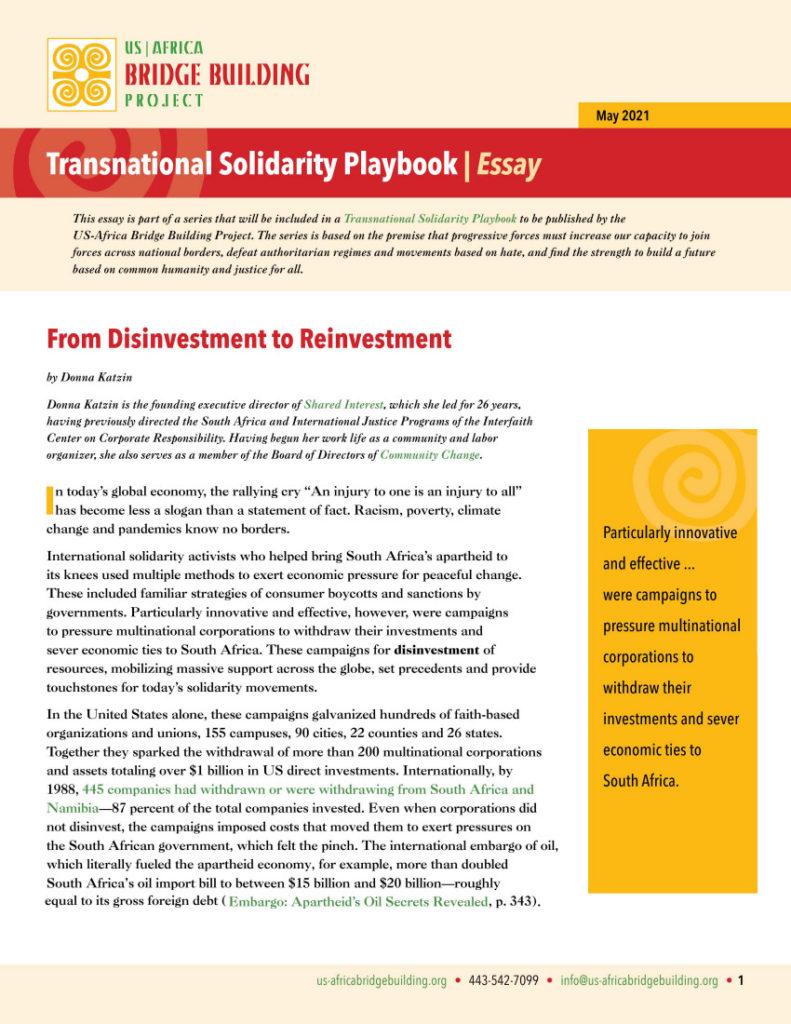