The Tax Justice Network Africa (TJNA), founded in 2007, has been one of the most active and successful of the regional federations working to stop tax evasion and illicit financial flows. Since 2015, the Mbeki report from the UN Economic Commission for Africa and the civil society Stop the Bleeding Africa campaign brought much wider recognition of the fundamental importance of tax justice to solving the critical problems both of Africa and of a grossly unequal world. Yet Covid-19 has made it clear that inequality is still being deepened, while a global elite continues to control a larger and larger share of the world’s wealth.

We asked Farah Nguegan of TJNA to answer a few questions. The interview is below, slightly edited for length. — Imani Countess

Imani: Development agencies and many people in Africa as well as in rich Western countries, assume that African countries need foreign aid, tr

ade, and foreign investment to address poverty and underdevelopment. The debate is often put as aid versus trade. Why did Tax Justice Network Africa take a different approach from the start?

Farah: The African continent is said to need foreign aid. Yet it hosts a great potential workforce of over one billion people below age 20, holds 30% of the world’s mineral reserves, boasts substantial arable land, and has countless new business opportunities. This paradox was visible not only to TJNA but to other civil society organizations, regional agencies, and financial institutions. Africa’s wealth does not fully benefit its sustainable development because much of it leaves the continent’s economy through financial loopholes. These loopholes, also called illicit financial flows (IFFs), include profit shifting, tax evasion, trade mis-invoicing, and other mechanisms analyzed in the High-Level Panel Report on Illicit Financial Flows from Africa, also known as the HLP or the Mbeki Report. The international community is a key partner of African development. But aid alone is clearly insufficient.

We recognized that IFFs are a mere symptom of a much bigger structural problem of unjust economic and power relations between Africa and the developed world that has historically impoverished Africa and enriched the West. Plugging the financial loopholes, however, is essential to addressing underdevelopment in Africa. That was the reason for the Stop the Bleeding Campaign that we initiated in 2015, along with other Pan-African civil society organizations. This required the mobilisation of African States, multilateral organisations, and citizens around the world, including in the countries of the Global North. It further required an interdisciplinary approach, multiple skills, and organizational resources including key research to inform policy actions such as the Mbeki Report.

Imani: The Mbeki report and the Stop the Bleeding Africa campaign were initiatives in very different arenas, that of multilateral organizations involving African governments and of civil society organizations functioning both at continental level and in individual countries. What role did TJNA play in both these developments in 2015, and why does the organization think it essential to work in both these arenas, as well as such initiatives as the International Tax Justice Academy?

Farah: TJNA helped shape the HLP recommendations by mobilising and convening different stakeholders including CSOs and trade unions to make submissions to the Panel. We also participated in subregional consultations and made submissions that fed into the outcome Report. Since the report was approved by the African Union, TJNA has been active in advocacy and awareness raising, including through publications such as HLP Report: A simplification of the AU/UNECA Report on Illicit Financial Flows from Africa.

The very multifaceted nature of illicit financial flows and tax injustice demands engagement both with decision makers and grassroots citizens. Indeed, because taxation has a global facet, it requires intervention at the United Nations and other relevant multilateral organisations. Firstly, the current international financial architecture works against the African domestic resource mobilisation (DRM) agenda, allowing as much as $89 billion estimated annual revenue lost to Africa. Secondly, in a bid to attract foreign direct investment (FDI), many African countries adjust to harmful tax incentives or sign questionable double taxation agreements that limit their ability to tax corporate income. Thirdly, natural resource taxation is also often poorly managed, and contributes far less than its potential to national development.

Therefore, forging global and regional alliances has been critical to advocate for global tax transparency. Thus, TJNA joined the Financial Transparency Coalition (FTC) in 2012, the Global Alliance for Tax Justice (GATJ), in 2013. We also have signed a collaborative memorandum of agreement with the African Tax Administration Forum (ATAF).

In order to build wider awareness and demystify the technical issues for civil society organizations and grassroots audiences, we have prioritized a wide range of educational programs. These include our International Tax Justice Academy (ITJA), an annual training program that TJNA launched in 2014. Under the motto “Building the next generation of tax justice champions,” ITJA is designed as a pan African initiative that seeks to inspire, empower and mobilise citizens across Africa through bridging the existing knowledge gap on tax justice in Africa.

Imani: This year TJNA and its partners in the Stop the Bleeding Africa campaign are “relaunching” the campaign. Can you tell us yet what this will involve, and what new initiatives will be included?

Farah: Since its establishment in 2015, the Stop the Bleeding Campaign (STBC) has been highly successful in building awareness about IFFs from Africa at national and continental levels. Further, it has contributed to broadening conversation on IFFs beyond specialized circles and mobilized ordinary people and grassroots social movements who are the most affected by IFFs. Five years later, the persistence of IFFs and the need for a coordination structure prompted the relaunch of the Campaign. TJNA is a proud member of this STBC Consortium which also includes: The African Women’s Development and Communication Network (FEMNET), Trust Africa, African Coalition on Debt and Development (AFRODAD); African Regional Organisation of the International Trade Union Confederation (ITUC-Africa), and the Pan African Lawyers Union (PALU).

For more information on relaunch events in February 2021, see the Facebook video on Relaunch of Stop the Bleeding Campaign and this report on the Alternative Mining Indaba.

Imani: The TJNA has consistently maintained an active involvement in global debates on tax justice and illicit financial flow, and promoted engagement with those concerned with these issues in countries of the Global North. In November 2015 representatives of the Stop the Bleeding Africa campaign, including Alvin Mosioma, Luckystar Miyandazi, and Briggs Bomba, met with activists in Washington, DC. But awareness of global tax justice is still more an exception than the rule among economic justice activists in the United States, who are preoccupied with their local communities. Will the relaunched campaign provide new opportunities for activists in the United States to learn from TJNA’s experience?

Farah: One unique attribute of the STBC is that it seeks impact both at national and international levels. Therefore, support from around the world including from activists in the United States is welcome. We invite everyone to sign the petition and to spread the message of the campaign with this short musical video. The STBC will include opportunities for digital activism and for provision of educational resources.

While the campaign aims primarily at constituencies on the Africa continent, the campaign also plays a leading role in global efforts which provide campaign resources usable anywhere. These include, for example, the 2018 campaign demanding that multinationals pay their fair share of tax in all countries they operate in. In March this year there are a series of events and educational resources highlighting Tax Justice for Women’s Rights.

Imani: U.S. states and local governments, like African countries, are starved of resources to meet community needs, such as health, education, and other services, while Black and Brown communities suffer disproportionately and multinational corporations and billionaires evade taxes. If you were speaking to local activists in Black or Brown communities in the United States, how would you explain to them why common international action is needed to address global systems that promote tax evasion.

Farah: In today’s global economy, multinational corporations and the ultra-rich find it easy to move their money across borders and to find loopholes in tax codes to avoid paying their fair share. Politicians and economists cite austerity as the excuse for not funding health, education, and other needs. Those of us who seek to promote justice must find ways to collaborate across borders so that public needs prevail over the unchecked search for private profits. 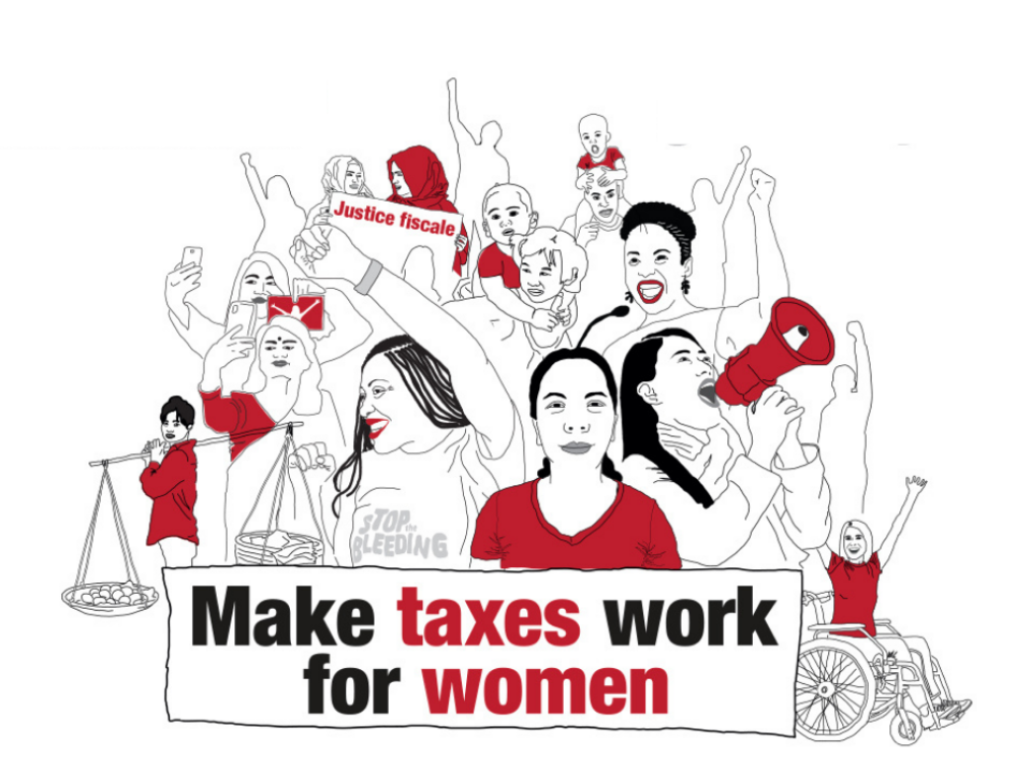