This report was written in 2014, based on extensive research done by Solidarity Center Africa Region staff and consultants in 2013, including interviews with trade unionists in nine African countries.

As noted in the foreword below by Kwasi Adu-Amankwah, “An array of conventions at the international level and laws at the national level offer potential for protecting the rights and interests of workers. All too often, however, these legal instruments are not utilized for the benefit of workers, largely because of unwillingness or inability of governments to enforce them and the failure of trade unions to ensure compliance.”

Unfortunately, this and other major conclusions of the report remain true today, even as the Covid-19 pandemic continues to spread. Workers, governments, and trade unions alike  are stretched to the limits by the economic fallout of the pandemic, as well as by multiple other preexisting stresses and crises.

Global solidarity, as outlined in the original essay by Sahra Ryklief which this web page accompanies, has never been more urgent.

Kwasi Adu-Amankwah is General Secretary of the African Regional Organization of the International Trade Union Confederation (ITUC-Africa), based in Lomé, Togo. He was elected to that post in 2007. He previously served in several positions in the Ghana Trades Union Congress, most recently as its Secretary General from 2000 to 2007.

The Solidarity Center report titled African Trade Unions andAfrica’s Future: Strategic Choices in a Changing World is a valuable document that provides useful reflection and insight on the African labor market and trade union situation. The report is based mainly on a survey of nine countries, eight with English as the official language, one with Portuguese. Five of the countries are in Southern Africa, namely, Mozambique, South Africa, Swaziland, Zambia and Zimbabwe; three in West Africa, namely, Ghana, Liberia and Nigeria; and one in East Africa, Kenya. 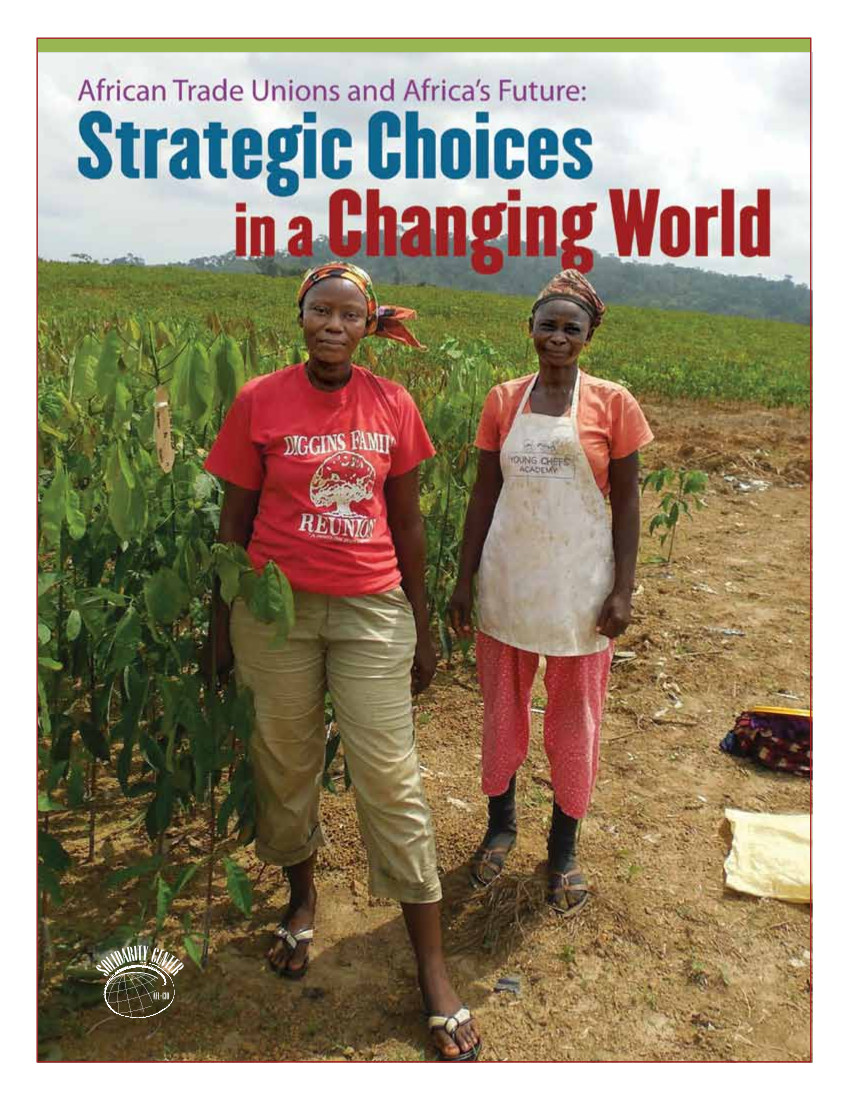 The report highlights the overall preoccupation of governments with macroeconomic stability and Gross Domestic Product (GDP) growth, which are not necessarily related to expanded employment and job creation nor to improved incomes and livelihoods. Reports by international agencies celebrate high rates of growth in a range of African countries and an inflow of investments, including from new partners such as China and Arabian Gulf States. But as this survey shows, such growth has not automatically translated into better well-being for the people. More striking, as the result of economic
growth, are new trends in the labor market such as outsourcing, subcontracting, growing informality and the rise of precarious jobs—all of which have had consequences for trade unions.

An array of conventions at the international level and laws at the national level offer potential for protecting the rights and interests of workers. All too often, however, these legal instruments are not utilized for the benefit of workers, largely because of unwillingness or inability of governments to enforce them and the failure of trade unions to ensure compliance.

This in turn relates to the capacity of trade unions to function as solid organizations that can defend, protect and advance the interests of workers and meet their expectations. Issues of concern include the shrinking traditional base of trade unions in the formal sector, lack of resources from inadequate subscriptions and other sources, inadequate research capacity and insufficient specialized personnel and skills for negotiations with employers and governments.

As part of the response to their changing fortunes, the survey shows, most unions now attach considerable importance to organizing in the informal economy. Unions have also, over more than a decade, paid increasing attention to enhancing the participation of women in the trade union movement and in union leadership, a theme well developed in the report.

Given that it is based on a single survey covering a limited sample of nine countries, the report does not and cannot provide a comprehensive picture of trade unionism across Africa. In particular, it does not include insights from the trade union movement in the French-speaking countries of West and Central Africa, most notably the Democratic Republic of the Congo. A trend mentioned in the report that merits further research, and which is especially notable in the French-speaking countries, is the fragmentation of unions. This results in multiple national trade union centers, most of them unsustainable on their own, competing for the loyalties of a formal-sector labor force that is a relatively small proportion of the labor force in the country.

The report also does not address the particularly difficult environments for unions in countries such as those in North Africa, where unions must navigate between powerful governments on the one hand and the threats of fundamentalism and terrorism on the other.

More generally, it is essential that African trade unions consider not only the particular issues raised by this report but also the wider framework for trade union intervention in policy. This in turn must be linked to a class and nationalist perspective and analysis. Such analysis must be appropriate for each country while also addressing broad issues of industrialization, regional integration, domestic control over policy and reclaiming cultural heritage: in sum, an alternative paradigm for development in Africa.

The trade union movement in Africa faces enormous challenges arising from the critical situation that confronts Africa and its people. The African people have been losers in their encounters with other civilizations over several centuries, with negative consequences for the material well-being of the majority of Africans. In the development of the modern state, from the colonial era into what can be described today as the neocolonial era, the systems of governance and institutions of public authority that have emerged often do not serve the interests of the people. Genuine leadership is needed to steer Africa out of its difficulties and enable Africa and its people to progress.

Since pre-colonial times, popular organization and mass mobilization have been central to advancing the interests of the African people. Trade unions across large parts of Africa marshaled popular forces and played significant roles in the anti-colonial struggle. In the post-colonial era, unions have continued, albeit with varying degrees of success, to play crucial roles in protecting the economic and social rights of workers and in securing benefits for them in the midst of the overall difficulties facing the African masses. In the modern history of Africa, therefore, the union movement has emerged as an important source of countervailing power for securing short to medium-term benefits for workers directly and for pushing the frontiers of politics and policy in the direction of social transformation for the benefit of the people as a whole.

Neoliberal globalization has brought growing poverty and misery to the world’s working poor and unemployed, as well as rising inequalities within countries and between regions of the world. Against this backdrop, there is an urgent need for trade union renewal. African trade unions need to get more workers organized and mobilized to secure day-today collective interests and to struggle for changes in the currently dominant paradigm of development.

Unions must reach workers in the traditional formal sector to reawaken their interest in unionism and in the struggle for achievement of worker rights. At the same time unions must rise to the challenge of organizing workers in the informal economy, enabling these workers to secure rights and social benefits as well as achieve self-help.

As part of this renewed commitment to rebuilding, unions must develop their capacity not only to negotiate benefits in the world of work, but also to exert political and policy influence on national development strategies. This can help ensure that the imprint of African workers is brought to bear on the imperatives of industrialization, African regional integration and the resurgence of culture that allows Africa to make its own creative contribution to modern development.

Renewed commitment to building unions should also be linked consciously to efforts to reduce the dependence of trade unions, particularly financial dependence. While solidarity may always be an essential ingredient in the mix of resources on which trade unions draw, trade union dependence on donors, whether external or internal, is certain to compromise union ideals and undermine the growth of sustainable unions that serve their members in the best traditions of the trade union movement. Solidarity support to African trade unions, particularly of a financial and logistical kind, should thus be fashioned in a manner that helps unions move toward independence and self-reliance. Efforts that promote trade union unity, especially at national level, can make an important contribution to achieving such independence and sustainability.

Everything needs to be done to rebuild trade unions in Africa to ensure they can make their due contribution toward salvaging the blighted continent from the depths to which it has sunk. Unions must organize and mobilize workers to secure short- to medium-term benefits while simultaneously joining with other progressive forces for transformation and development. Failure to take on both tasks will condemn Africa to continuing crises and social explosions, betraying the hopes and aspirations of the continent’s peoples.